So, we’ll give LaCroix a pass for launching a flavor for this upcoming summer named after a place that’s currently headed into winter.  No hemispheres in LaCroix’s world, it seems.

But São Paulo?  The largest city in all of the Americas??  The number one. (For scale, New York is number four on that list, after Mexico City and Lima).

What we’re trying to say is when we saw a tropical fruity sparkling water named after a city bigger than New York, we scratched our heads a little bit.   It’s like naming it Papaya Beijing: jungle fruit with a hit of smog and traffic?

If you’re trying to evoke tropical Brazilian vibes, at least give us Guava Rio or even Guava Manaus.

On top of that, guava is native to Central America/Southern Mexico, so Guava Guatemala City would have made just as much sense, while simultaneously bestowing upon us some darling alliteration.

But from Brazilian waxes to Brazilian blowouts and slathering our bums with Bum Bum Cream, Americans have been trying to groom ourselves into Brazilians for a while now, so sure, why not Guava São Paulo.

And let’s be honest, this is from the team that brought us “Beach Plum” so we don’t know why we had hopes for LaCroix when it comes to “things that go with the beach/tropics”.  LaCroix, you midwestern charmer. We adore your attempts to be not Wisconsin.

This is not to say we’re not fans of this lewk!

We actually think LaCroix stepped up its visual game here, because even the can is cute. (For LaCroix. Not, like, for the world.)

The cursive evokes a certain vintage Brazilian aesthetic. The color is a pretty pink and the guava rendering brings to mind the brightly fruit-patterned oilcloths of Latin American cafes. We can hear Samba gently in the background just looking at the can.

But enough preamble, let’s drink up. Vamo vamo! (👈  we learned that expression from our Brazilian friend who loves Corinthians.)

When you crack Guava São Paulo open, you can smell the tantalizing aroma of tropical fruit from a foot away. It’s genuinely mouth-watering.

(We are so excited for what this portends, we mentally said a prayer for it to not let us down. We want this to be good so bad.)

Thank you, Christ the Redeemer! (another Brazil reference!) This is everything we could ever want from a guava bubbler. 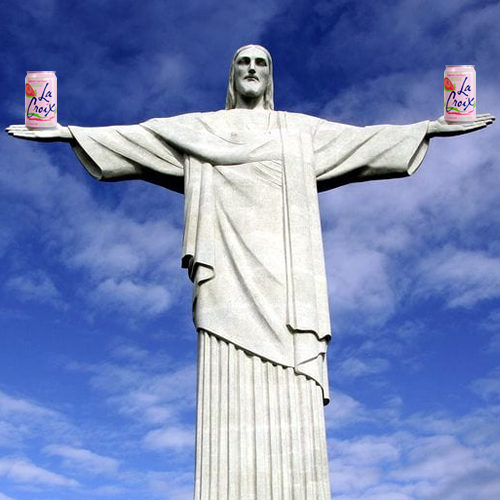 Now here’s where all our surly shit talk melts away into a Bossa Nova dream. And we’ll be honest: of the three new LaCroixs for 2021, this one is our favorite.

It’s so perfectly tangy and piquant that it almost feels like some actual guava juice was lightly squeezed in here. But no, there’s no juice: it’s just LaCroix’s “naturally essenced” magic.

Now we’ll be honest, we don’t eat a lot of actual guava fruit, mostly just the Guava Rolls from Panadería Rosetta, so we’re not exactly experts on what fresh guava tastes like.  But something deep in our marrow tells us this is accurate. We just know.

If we try and find another flavor reference for what this conjures, we realize this also kind of gives us a perfect tart strawberry. Once you taste that strawberry note, it’s hard to untaste.

We’re glad we’re not alone, because the presence of strawberry is actually quite distinct. We don’t detect any pear, but we’re not missing it.

This is a lush, sultry bubbler and pretty much perfect.

You can practically hear a macaw in the background as a coati creeps up to try and steal the LaCroix out of your hand. That is how much of a journey this takes us on.

(Unless we’re actually in São Paulo, in which case we’re probably just drinking a LaCroix in a hipster cafe.)

LaCroix has really stepped up their flavor game with Guava São Paulo, and truly, with all three of these 2021 sparkling waters, even the confusing Black Razzberry.

Part of LaCroix’s appeal has always been that their product seems phoned in, and flavor is kind of an afterthought. Cute packaging not even a thought. We’re not unconvinced that Pamplemousse‘s astonishing popularity is not a tinge ironic.

But this seems like a new LaCroix. As if they did some serious soul searching during all that quarantine last year and realized they wanted to do more with their lives.

And we’re glad that LaCroix is emerging from the pandemic hellscape cuter, tastier and more engaged with the bubblenauts of the universe. It’s time.

And we said earlier this year that we think Topo Chico’s delicious Twist of Tangerine might be our top of 2021.  But Guava São Paulo is now a serious contender, the best American interpretation of something Brazilian since Fogo de Chão.

We’re trying to make this website better for bubblenauts everywhere
and would love your input.

Yes, I will tell you what to do.

more reviews for your consideration